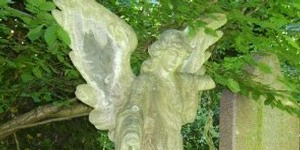 The Spy Who Came in for the Phone

The Worst Day of My Life

When a Man Knows

Everybody’s Dying to Meet You
A Phantasmagorical One Act Comedy

Sue: Very easy-going
Jenna: Worries about everything
Rebecca: Bit of a know-all
Marianne: The sceptic
(Four friends who can be of any similar age or a mix of ages)
Arabella: A ghost tour guide? (Flexible age)

The Setting: A secluded spot in a cemetery

Sue and her three friends meet for occasional picnics at unusual locations. This time, they find themselves surrounded by tombstones in a neglected Victorian cemetery… and it’s getting dark.

Rebecca, who chose this location, tells them that it is not only the final resting of place for several murderers, but it’s also reputedly haunted with a history of visitors mysteriously disappearing without trace. As a result, the cemetery is now a magnet for ghost tours led by guides dressed and made-up like horror film characters. Strange incidents and sightings have been reported. “Because it’s all faked,” declares Marianne, the cynic of the group.

Jenna, who worries about everything, fears that they might get accidentally locked in. This, alarmingly, turns out to be the case when they discover the gates are locked, earlier than expected. This shouldn’t be a problem when they’ve all got mobile phones. But it is when everybody’s phone mysteriously stops working.

Then they encounter Arabella Underwood, who looks like a tour guide. Or might she be something more sinister?  A nearby tombstone is inscribed with the same name and her vocabulary ranges over a century. Arabella says she is about to celebrate her birthday with all her closest neighbours, including two murderers whom she regards as old friends. All the picnickers, except Jenna, dismiss all this as a complete wind-up.

But when they realise all their watches have frozen at the same time and Arabella demonstrates her spooky ability to cause church bells to chime midnight (when it isn’t) and summon a low rolling mist, it’s scary time, especially when they’ve been cordially invited to her birthday party.

Mixing gallows humour with every classic horror ingredient you could imagine, including ghosts, vampires, werewolves and zombies, this script offers equally shared and substantial roles for five women plus potential fun for your technical crew.